by Katie Prescott BeasleyPosted on December 2, 2018 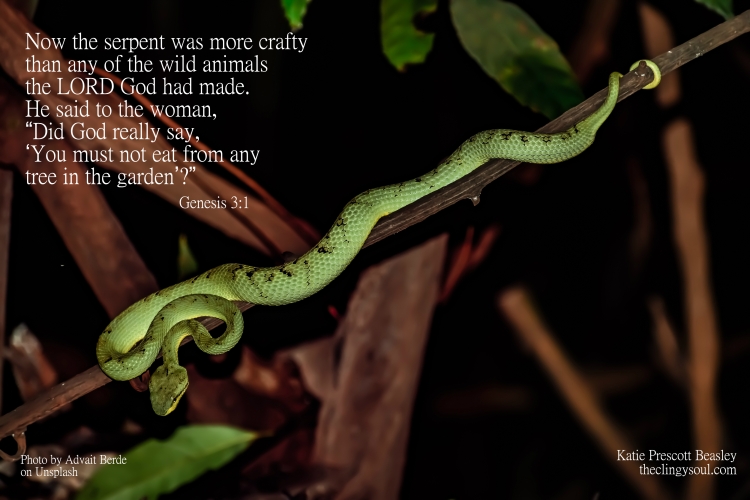 Now the serpent was more crafty than any of the wild animals the Lord God had made. He said to the woman, “Did God really say, ‘You must not eat from any tree in the garden’?”

“You will not certainly die,” the serpent said to the woman.  “For God knows that when you eat from it your eyes will be opened, and you will be like God, knowing good and evil.”

When the woman saw that the fruit of the tree was good for food and pleasing to the eye, and also desirable for gaining wisdom, she took some and ate it. She also gave some to her husband, who was with her, and he ate it.  Then the eyes of both of them were opened, and they realized they were naked; so they sewed fig leaves together and made coverings for themselves.

I had a rich discussion with the good Rev (that’s my husband Todd if you’re new to The Clingy Soul) about Satan’s temptation of Eve. He pointed out something that I hadn’t noticed in the story before–that Satan tricks Eve into believing that God was holding out on her. I’d always believed that Eve just wanted the fruit, but the enemy taught her to doubt God.

Very crafty was Satan the Serpent. Notice his wording (I added the emphasis), “Did God really say, ‘You must not eat from any tree … ?’” The more I read it, the more astounded I am at his audacity. He deliberately misquotes God, but acting as if he can’t believe God would do such a thing. Did God really say that???

He knows exactly what God told Adam about the trees. He only says to Eve what serves his diabolical purpose. Satan leads Eve to consider, really to doubt, the goodness of God’s instructions. For heaven’s sake, why just the one tree?

As the conversation continues, he plants the idea in Eve’s mind that God doesn’t want to share. God knows things you don’t know. Sees things you can’t see. He doesn’t want you to be able to do those things, Eve. Eat that fruit, and you’ll be like Him.

Now, that’s the Katie Beasley amplified and paraphrased version of the passage. But still, the devil knew how to hook his prey. She may have lived in Eden, but she had heaven. No deficiency existed in her life. God richly supplied for every spiritual, emotional and physical need in the garden. She had all of God she could ever want or need, and all purity and all innocence and all beauty given to her.  A loving Father endowed the best of creation and heaven to Adam and Eve, who had to do exactly nothing to earn it.

How does Satan deceive Eve into believing that what God has given isn’t enough? Well, let’s think about that. How does Satan convince any of us that we don’t have enough? He dangles something under our noses that we don’t have, that’s how. And in Eve’s case, the one thing she didn’t have belonged to God alone. Now, if God is so good, Eve, then why would He withhold something good from you?

Eve should have been content, right? Instead she chose to compete with God. This story demonstrates more for me about the grip of evil on this world than anything I’ve read in scripture or in the headlines or in a history book. We have plenty examples of violence and cruelty and narcissism and greed in our world, but this story features none of those things. And yet, it is evil. Why?

Because she had everything, and she still thought God owed her more. It became the beginning of sin for mankind, and it is the impetus of each sin we commit–trading contentment for competition.

That’s the rub, folks. Every one of us has been there–in the place where we want something that we can’t have and wonder why God is withholding something good from us. But, have you noticed anything about the thing Eve wanted? It looked good, but it actually led to her destruction.

We read and study the relevant scriptures during Advent to prepare our hearts for the coming Christ. Maybe one thing we need to prepare for Jesus this Christmas is decide that God’s authority is a good enough reason for Him to say no.

I have had a bunch of miscarriages. Many, many times I’ve asked God why He withheld something from me that is good. Virtually every other woman has biological children. Why not me? God’s consistent no to my requests for something good has derailed my faith more times than I can count.

But James tells us to “consider it pure joy… when [we] face trials…”(James 1:2, NIV). That doesn’t mean that I naturally find joy in losing a child. It means that I decide in favor of joy, rather than assuming that God isn’t good.

We have only to look at Christmas and all that followed to see God’s goodness. He bestowed the best of creation and heaven in the gift of His son. Jesus is the source of our joy and our hope, and He is coming again. Time to get ready.

Taste and see that the Lord is good;
blessed is the one who takes refuge in him.