by Katie Prescott BeasleyPosted on December 10, 2014

The true light that gives light to everyone was coming into the world. He was in the world, and though the world was made through him, the world did not recognize him. He came to that which was his own, but his own did not receive him. Yet to all who did receive him, to those who believed in his name, he gave the right to become children of God–children born not of natural descent, nor of human decision or a husband’s will, but born of God. The Word became flesh and made his dwelling among us. We have seen his glory, the glory of the one and only Son, who came from the Father, full of grace and truth. John testified concerning him. He cried out, saying, “This is the one I spoke about when I said, ‘He who comes after me has surpassed me because he was before me.'” Out of his fullness we have all received grace in place of grace already given. For the law was given through Moses; grace and truth came through Jesus Christ. No one has ever seen God, but the one and only Son, who is himself God and is in closest relationship with the Father, has made him known.  John 1:9-18 (NIV)

So . . . I missed another day. But I didn’t miss because I was too tired. I missed because I was spending time with my family! That’s a good excuse, right? After a game of Wahoo that put my daughters at each other’s throats, we went light lookin’ (my husband’s term). I had about half of this post written and wanted more time to finish than thirty minutes before my face hit the pillow. Here ya go . . .

I tell my students routinely that they don’t have rights. As you might expect, this provokes some protest. “What??? We have freedom of speech! Freedom of expression!!” And we’re in Arkansas, so, figure on at least one kid per class getting really upset that I’m not acknowledging their 2nd amendment rights. But obviously I’m not in favor of wiping anyone’s Constitutional rights off the books.

Follow me on this. Do you have a right before God to say whatever you want in any way you want? No. The bible says we’ll be held accountable for every careless word that drops from our lips. Women’s rights activists claim that I have the right to choose what to do with a pregnancy. Is that a claim that can be made before God? I’d like to see you try. Or maybe I wouldn’t. The government and its laws allow me plenty of room to act immorally. Do I have a right before God to do those things? Certainly not.

I’ve only seen a couple of places in scripture where the word right is used in this way. Prior to in-depth bible study, like any American, I assumed that documents written by the founding fathers were akin to the gospel. And like any American, I’m grateful that I live in a country where I can speak my mind without fear, assemble to worship the one true God–again, without fear–and I’m not giving up my 2nd amendment rights either.  Political rights and human rights–these are good things, very necessary things, to ensure (or at least strive toward) the safety and equal treatment of all people.

But in terms of my relationship with God, having rights is an illusion. Rights empower me, and when I feel empowered, I tend to make myself an idol. Then I quickly screw something up, rather badly, and find out that I’m not God for a variety of good reasons. As I’ve come to know Him more intimately, I realize how I’ve allowed that American sense of entitlement poison my perception of things. Everything that I have came from Him. Everything. I said to my students once, “Breathe in. Breathe out. God did that. Now thank Him–because you didn’t give you life.”

In this passage, we find that those who receive the Lord Jesus and believe in His name are given the right to become children of God. It’s a curious use of that word. He may be extending to me a right, but it’s the right to be a child–dependent, maybe even helpless–under the absolute authority of an all-powerful God. My political rights give me the power to challenge authority if the need arises. God is in authority over all of us–whether we choose to acknowledge that authority or not. His power is absolute, which would be threatening if He weren’t also just, righteous, and good.

The right to be a child of God means that my status has changed–my days of slavery have ended; the King has adopted me and paid for it with His blood. Forever I will have the right to lean entirely on the power of my Father. That’s a radical gift for many, many reasons–not the least of which is that I get to depend on Him rather than myself. I’ll gladly give up entitlement in order to have the pressure transferred to someone who can truly handle it!

What we have in the Lord is favor which is unmerited and cannot be earned. “Out of His fullness, we have all received grace . . .” Lots of gifts will be exchanged this Christmas, some quite expensive. We will interpret the value of each gift, sometimes because of the expense, sometimes based on a gift’s usefulness, or maybe a gift is priceless in our eyes because of the identity of the giver.

In being given a Savior, we have value in all three. It is priceless, it is eternal. The Giver of Grace IS THE GIFT, and He IS priceless and eternal. 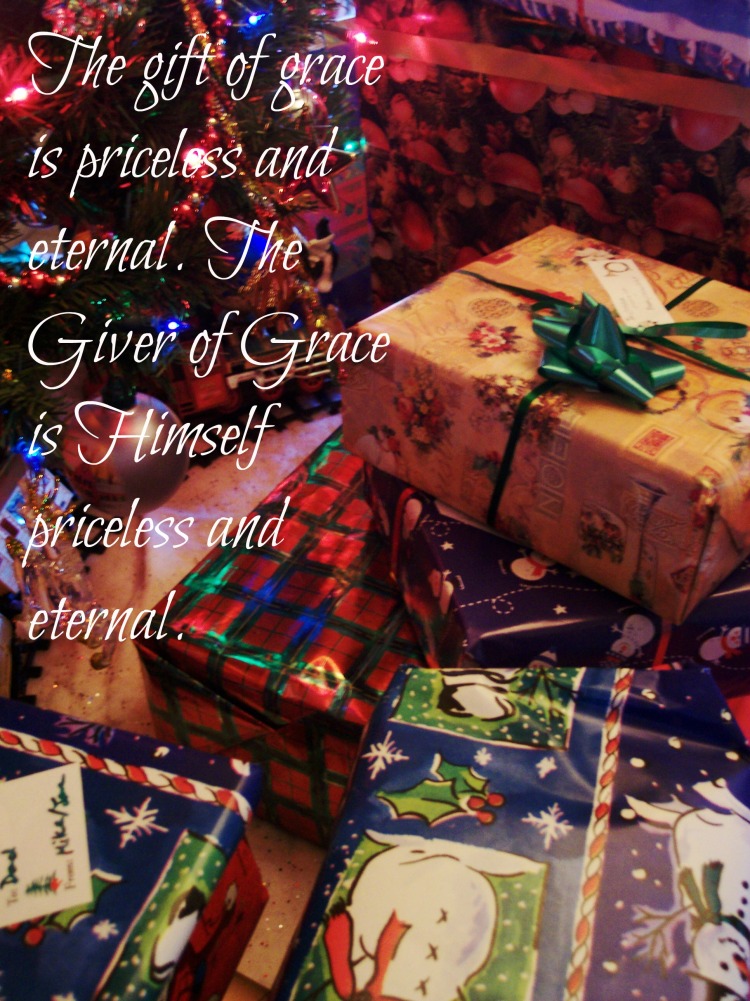 Lord, open our eyes to see the incomparable value of Your gift to us.