Gotta make this fast. You have NO IDEA what it’s like to sneak a little time on this computer.

First, allow me to introduce myself. I’m Zack. Or Zacky, Z-Dog, or even just plain Z. Or, there’s always my full title, Zacchaeus Our Wee Little Man. For some reason, my mom thinks that’s funny. I’ve never gotten the humor. 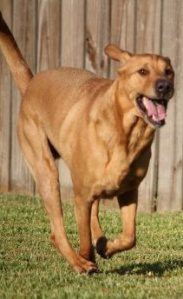 I had to hijack the computer for a little while because I think I can contribute to my mom’s little blog here. She’s been talking a lot lately about being chosen. No one in this house knows more about being chosen than ME! That’s the truth.

See. I was adopted. I really needed adopting, but I didn’t know it at the time. My mom—the other one, my dog momma—had a huge litter of pups in a dog pound down in Orange, Texas. I had no idea at the time that I was spending the first few weeks of my life in what they call a kill shelter! Isn’t that the most horrible thing you’ve ever heard???

If I hadn’t been chosen, they would have killed me! And I had. No. Clue. Everything was OK, as far as I could see. I didn’t know any different. My dog momma was in pretty bad shape, though. She had me and all my brothers and sisters. We were all together for a while and then she just wasn’t there anymore. I try not to think about it too much, but when I do, I just imagine that she was chosen. But I don’t really know.

Everything at the pound was handled for us pretty much. At the time, I was satisfied. We had food and a slab of concrete to sleep on. We had lots of fleas and stuff, but like I said, we didn’t know any better. So we stuck together. We played and wrestled. It’s funny that now I realize how little I had since I’ve been chosen.

A couple of my brothers were chosen early on, so I had some idea of why these people were wandering in and out. They would come in and watch us, give us a pet or scratch behind the ears. Some would even pick us up and hold us, and we’d gnaw on their fingers. We liked the attention, but we didn’t really know that we wanted to be chosen. It’s like the full meaning of being chosen was kind of blocked from our view at first.

One day my mom and dad came in. Same routine—checking all of us out, a little pat, maybe a belly rub. I kind of waited for the love ‘em and leave ‘em maneuver, but they didn’t just grab a pup and run.

It’s something I’ll never forget. They sat on our concrete slab and loved on us. But pretty soon, my family–the other pups, I mean– lost interest. They’d rather chew on each other’s toes and ears or dive in and out of the food and water dishes. I’d wander off a few steps and come back. I’m not sure why, but I wanted these people to love me.

Mom said to me not too long ago, “Sweet boy. You know why you were chosen, right? It’s because you followed.”

Then Jesus said to the disciples, “If anyone wants to be a follower of mine, let him deny himself and take up his cross and follow me.  For anyone who keeps his life for himself shall lose it; and anyone who loses his life for me shall find it again. What profit is there if you gain the whole world—and lose eternal life? What can be compared with the value of eternal life? Matthew 16:24-26 (TLB)

Wow. I’d kind of forgotten that part, but she’s right. If they got up and moved away, I ran right back to them. I did follow. It wasn’t clear to me at the time—but they would have chosen more if more had followed!

But then came the big change. I had no idea what I was in for. No more concrete slab. They had brought me home. They had prepared a place for me. There was so much more to being chosen than I’d realized! Like rules and discipline—no more chewing on anything and everything. And I couldn’t just poop and pee on their floor like I did on the concrete. That was tough. I didn’t like being taught at first. I just liked the love part. It took a long time for me to get that being taught is part of the love.

The worst part was the vet. Ack! Mom said that it wasn’t just all the nasty habits we had to get rid of—we had to lose all the lingering pests from my old life. A trip to the vet, and—I won’t go into all the details—I had medicine for all the parasites trying to make their life by ruining mine. Then my mom and dad insisted that I stay in the boundaries of the house and the yard, or the problems from that old life would be back and cause all kinds of problems.

Oh, and I almost forgot! I wasn’t the only one the Beasleys chose! Check out my sister Trudy and my brother Malachi.

Mal, actually they called him Bitty, was even worse off than I was when he was chosen. He was all by himself with no cat momma and no brothers or sisters. My mom heard him crying in a parking lot and he RAN to her. Now that’s following. He knew he needed to be rescued. I was so caught up in what I thought my life had to offer that I didn’t know I was living in a death factory! Bitty knew that his life meant sure death!

Now, Trudy was in a city pound like me. She was really sick when she was chosen, but she didn’t know it yet. She had something called distemper and when she got with the Beasleys she gave it to Bitty. They had to give medicine to both cats, which my mom said was hellish. Dad tells a story about trying to force them to take their medicine, but they kept fighting him off. See, they hadn’t figured out that tough part of being loved like I mentioned earlier. Dad had to tell them over and over, “If I don’t make you take the medicine, you’ll die!” Mom and Dad took a beating from those cats to make sure they got better.

Eventually Mom and Dad adopted a couple of little girls—you know, after their own kind. I love those little girls. They do a lot of the loving! I do my best to love back, too. I bark and bark if anyone gets near the house. See, I know that’s my job as part of the family. It’s my gift! I scare the feet off of everybody so they won’t hurt my girls.

Just a few more things about being chosen before I sign off. I live day in and day out with my Master and his family. I’m more like them now than like the dogs I used to run with! I’ve changed a lot! I’ve gotten so much better about the rules, but I still have to be disciplined sometimes. That’s OK. They are so sweet and forgiving, and even though I’m an old man now, they still teach me. Do you know that I even eat from the Master’s table? It’s true! They would never give me anything that’s bad for me—like chocolate. I got seizures when I stole Kisses from the girls’ Halloween candy. But Dad gives me good stuff, even a little steak here and there.

Here’s the thing about being chosen. I don’t miss the old life. I did a little at first. Then I realized how many good things came to me that never would have if I hadn’t followed. Now I follow and I follow and I follow. Mom’s in the kitchen? Me, too. Moves to the bedroom? Yep, I’m there. See, now I know that I was rescued—and just how horrible a place I was rescued from! And because I love my Rescuer more than anything, I won’t stop following!

Long ago, even before he made the world, God chose us to be his very own through what Christ would do for us; he decided then to make us holy in his eyes, without a single fault—we who stand before him covered with his love.  His unchanging plan has always been to adopt us into his own family by sending Jesus Christ to die for us. And he did this because he wanted to! Ephesians 1:4-5 (TLB)