Last year, I wrote a piece about doing away with a little falsehood…the one where we see someone who is suffering and say, “God never gives you more than you can handle.” I’ll admit, I mounted the proverbial high horse for that one. There may even have been some smashed toes. Afterward, I’ve noticed that I feel this interminable itch every time I come across something that references scripture or faith and yet is still a half a bubble off. Sounds a little God-ish, and it feels all warm and fuzzy. And look, they included a picture of a dove at sunset over the ocean with a silhouette of a lone man, arms stretched toward heaven, standing on a rock by the shore…it MUST BE TRUE!

A prodigious desire to make corrections to these poufy, cutesy little witticisms on Facebook is, at times, my Everest. Ever seen Bruce Banner fight the transformation into the Incredible Hulk? That’s me, wrangling with my inner blabbermouth, ever the busybody. I’ve a well-deserved reputation for speaking my mind when I should not. A good Sunday is a rare Sunday where I walk out of Bible study on both feet rather than hobbling with one thrust in my mouth.

But you know what’s coming, right? Something has me itching. It’s a little ditty about faith. There’s so much potential to misread and misuse it—a little like an axiom, which is unproven and yet used to prove other things. Here is a so oft-repeated adage that, despite its obvious deficiency, is posted, postered, plaqued, paraded, framed, and forwarded. In its digital form, it usually looks a little something like this… 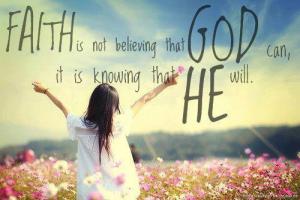 Isn’t that just gorgeous? I feel soothed, don’t you?

So, we have faith if we just know for certain that God will…God will WHAT, EXACTLY???
• get you that job?
• make that man or woman fall in love with you?
• drop a large sum of money in your lap?
• magically convert your strong-willed and shockingly rebellious preschooler into a docile and compliant sweetheart?
• make this pregnancy the one that you finally are able to carry to term?
• miraculously heal a loved one of a terminal illness?

I have no doubt that this flimsy definition of faith began with the sincerest of intentions. Even folks who are well-studied in scripture are tempted to fall back on that faulty premise—that I can decide for myself what the outcome should be and by my firm conviction that God will, it shall be. My fear is that this belief is put into practice, at times when circumstances are so dire, with the end result that hopes are dashed, hearts grow weary, and faith is lost.

The very best teaching I’ve ever heard on this subject was Andy Stanley’s study Faith, Hope, and Luck. I loved it. He began the discussion of the biblical definition of faith by not talking about what faith is, but by talking about what it isn’t. Forgive me if I misquote you, Andy Stanley, but these are the notes I wrote in my bible. Some of it is a mixture of you and me, I think.
• Faith is not a force that you tap into or harness. (Andy, I’m pretty sure that’s all you.)
• Faith is not a formula that I can follow and be assured of an outcome.
• Faith is not the same as confidence.
• Biblical faith is not complicated. It is confidence that God is who He says He is.

This one isn’t written in my bible, but I’m sure I heard Andy say it, and I’ve repeated it to myself over and over again—my faith does not rest on anything other than Jesus Christ and His work through the cross. Furthermore, true faith does not hinge on what I think God ought to do.

I’ve looked at Hebrews 11 again and what is really at its heart. The end of chapter 10 recalls the suffering and persecution that the early Christians had so far endured and an exhortation to persevere. The 11th chapter begins, of course, with the biblical definition of faith—“the assurance of things hoped for, the conviction of things not seen” (NASB). Linking the end of one chapter with the beginning of another gives me a little perspective. It’s as if the writer was saying—we may not have experienced the desired earthly outcome, but our reward is something that cannot be seen, and we’re certain of it. What then follows is the famous list of the ancients who were commended for faith, some who most certainly lived through circumstances from which we might all ask to be delivered. What I see here is a whole list of people who were ever surprised by outcomes. Yet, they had faith.

The writer of Hebrews, in exhorting his readers to deeper faith, even includes the suffering of the prophets, which would be frighteningly familiar to his audience, our Christian forefathers. “They were stoned; they were sawed in two; they were put to death by the sword” (Hebrews 11:37, NIV). And yet, according to Hebrews, these giants of faith did not live to see the promise fulfilled. They were not able to use The Force to bring about a happy ending. Would they have said that faith is simply believing hard enough that God “will” and then everything magically works out?

Moving on to chapter 12 , we see Jesus who, in the pursuit of joy, endured a death He didn’t deserve. A death that the Father could have prevented. The “perfecter of our faith” even asked God if there could be another way, but “[became] obedient to the point of death, even death on a cross”. So…Jesus asked for a different outcome? Yes, yes He did. And God didn’t give it to Him? No, and there’s more to it than that. Jesus had the authority to do a little switcheroo and steal the outcome that He wanted, but He didn’t. Where is He now? At God’s right hand—the reward for which He had hoped and was certain. I haven’t seen it, but I’m convinced of it. He’s there, along with the “great cloud of witnesses,” existing forever as a testimony that this life we have here is nothing in comparison to the joy to come.

No one begins their walk with Christ with the maturity to say, “Your will, not mine, Lord.” We may think that’s who we are in the beginning, but when something truly disappointing or painful comes along, we all experience a little shock and accuse God of not loving us enough. But let’s examine the people whose faith we truly admire. Do we regard them so highly because God has tied their lives up like a gift with a bow on top? Is it because they are exceedingly wealthy, healthy, and have children living a likewise charmed life? Is it because their prayers have some magical fairy dust quality and they always get exactly what they want?

Or is it because they’ve lived through something dreadful and still trusted God with the outcome?

A colleague of mine was diagnosed with cancer about a week ago. She sent out an email announcing the diagnosis and asking for prayer. But get this–not once in the email does she ask us to pray for healing. She’s asserts that God is in control and asks us to pray for her family. And then she said—I don’t think I’ll ever forget this—“pray that I will walk this path He has chosen for me in complete obedience.”

People of God, if you don’t gasp at that demonstration of faith, check your pulse. Maybe that’s a description of faith we should frame and place on our desks.