by Katie Prescott BeasleyPosted on December 4, 2018

After this, the word of the Lord came to Abram in a vision:

“Do not be afraid, Abram.
I am your shield,
your very great reward.”

But Abram said, “Sovereign Lord, what can you give me since I remain childless and the one who will inherit my estate is Eliezer of Damascus?”  And Abram said, “You have given me no children; so a servant in my household will be my heir.”

Then the word of the Lord came to him: “This man will not be your heir, but a son who is your own flesh and blood will be your heir.” He took him outside and said, “Look up at the sky and count the stars—if indeed you can count them.” Then he said to him, “So shall your offspring be.”

Abram believed the Lord, and he credited it to him as righteousness.

A couple things make posting daily for Advent difficult. First, it’s daily. I tried this a few years ago and only got twelve posts done. Perhaps I can be more realistic this time. If I can’t get one finished each day, I may have to borrow from those old posts. Back when I was a perfectionist (err—before I started trying NOT to be a perfectionist), I would have viewed a small glitch in the plan, such as borrowing an old post, as a total failure. I’m on the mend, though, friends. No shame in recycling a piece.

Another thing that makes this hard is that not all Advent readings sound Christmas-y. When I first decided to do this a few years ago, I wrote that I wanted to spend December meditating on Advent scriptures to clean up my act at Christmas. In other words, I could feel myself giving more glory to the things I love about Christmas than giving love and glory to Christ.

But after a week or so of writing, I felt restless. The scriptures took me to the Old Testament first, so I didn’t get to marinate as much as I wanted in the story—the weary travelers, the crowded inn, shepherds watching their flock by night, wise men from the east. What’s worse, writing commentary about sin and repentance felt like such a drag at this time of year. Where was the holly jolly? I missed snowmen and mistletoe, wassail and reindeer, stockings hung by the chimney with care, elves and ornaments and bright red bows.

I am actually in favor of holiday traditions. I thoroughly enjoy decorating and gift giving and cooking for a crowd. No one is going to shame me into removing the Christmas stockings from the mantel because it’s a tradition that doesn’t do enough to promote Jesus.

Still, I’m not going to flip open my bible and find a big guy who rides in a sleigh or a Currier and Ives snow scene or Ebenezer Scrooge. What I do find in scripture is the truth. I enjoy stocking stuffers and peppermint bark. I need truth.

We’ve spent two days in Genesis, and I’m going to park it here for a couple more days. I’m anxious to get on with the story, but we need the discussion about sin and the curse and the Old Covenant. Why? Because it is the truth, and those stories inform us of the deep need we have for Jesus. If we don’t understand the mess we got ourselves into with sin, then we probably don’t know the value of salvation. We may be glad to be rescued, but we cannot be truly grateful if we never knew the enormity of our debt to God. We have to take a look at the darkness to know the exceeding worth of the Light.

Yesterday, we glimpsed a little of that darkness by reading about Adam and Eve’s appalling failure, having traded contentment to compete with the authority of God. Their choice brought a curse on the world. It meant that they no longer had heaven mingled with creation for their home, and they no longer enjoyed complete protection from evil.

God assured them of Satan’s eventual defeat, but it would be centuries of centuries in the making. If you have never studied the Old Testament to see how God put His plan in place, you’re missing out. I love the story of Abram, who later became Abraham. So many impossible things take place in his story.

For starters, Abram didn’t have a bible to read. He had no precedence for faith like the kind God required. Abram, in fact, came from a pagan family. Their brand of religion was more of a multiple-choice variety. There are tons of gods. Pick one. Or two or three.

Then one day, the Living God called him to leave everything. Everything. And not just to leave everything, but to go to a non-specific location—details to be revealed on a need to know basis. I call this impossible—miraculous if not overtly so–because it is so unlikely! People rarely do the “leaving everything” bit in the first place, especially if they have no idea where to go. We don’t get excited about having no support system, no network, no assurance of success. We like family and familiarity and a specific destination that we can mark on a map.

Abram did all of this for a God who spoke. And of course, Abram likely heard competing voices–from his own family’s objections to the many prevalent pagan gods who maybe don’t ask for such dramatic acts of faith–telling him that listening to this God (whoever he is) would be lunacy.

Today’s reading, Genesis 15:1-6, takes place a long time after God’s initial call. He had promised to make Abram a great nation which would in turn bless all other nations. This is a reference to our rescue by the gift of God’s Son. Abram’s descendants would become God’s chosen people, the nation which would give us the Savior. Through Him, all people would be blessed.

There’s just one problem, though, which Abram humbly points out. I remain childless.

Put yourself in his shoes for just a moment. You’ve left everything and encountered all kinds of dangers and now live as a foreigner in the land. Meanwhile, the promise of becoming a great nation does not seem likely as you’re approaching old age and have no child. Now, how ready are you to listen to the Lord?

I can testify to this. We (and by we, I mean I) don’t like it when God doesn’t deliver. Like I mentioned in Advent 2, Competition or Contentment, we doubt God’s goodness all too easily. Abram may have had doubts, but God simply reassures him, and “Abram believed the Lord, and he credited it to him as righteousness.”

You’re kidding me, right? I mean, that’s all it took? Take a look at the stars, Abram. You’ll have that many descendants. And Abram believed.

I’ve never been so easily convinced that God would do the big, impossible things. Have you? When it takes so long to see God’s purpose unfold in my life, my faith tends to shrink.

I think Abram’s response has to do with two things. First, God had not let him down. If you read all of Abram’s story, you will see that God did not disappear from his life in chapter 12 and then reappear in chapter 15. God did bring Abram to the land that He had promised, God intervenes when Abram and Sarai encounter a dangerous crisis in Egypt, God spoke to Abram directly when he and Lot separated from each other, and at the end of chapter 14, Abram had just received a blessing from Melchizedek who was a king and a priest to the Most High God.

Abram had a number of reasons to take God at His word—because God had His hand on Abram’s life. Now, why can’t we do that? We have only to look at the cross and know God’s care and attention for us. Why do we doubt?

Here’s another thing I’ve noticed about this passage. I think Abram believed God because He knew the value of the reward.

“Do not be afraid, Abram.
I am your shield,
your very great reward.”

Some translations read, “Your reward will be very great.” But I like this rendering better. It reminds me of Paul’s discussion of Christ as the reward in his letter to the Philippians–

What is more, I consider everything a loss because of the surpassing worth of knowing Christ Jesus my Lord, for whose sake I have lost all things. I consider them garbage, that I may gain Christ and be found in him …

Maybe Abram evaluated the reward of the Living God against the pagan gods he had abandoned, and believed God for His incomparable worth. For his belief, Abram is credited him with righteousness. Abram’s reward was God Himself, a right relationship, which he could not earn and did not deserve, with the Creator.

Like Adam and Eve in the garden, we have all the beauty of heaven and the best of creation bestowed to us in Jesus Christ. We believe, we place our faith in the Son, and He makes us righteous, so that we may also be at peace in a right relationship with the Father.

Our culture makes a lot of noise about the “true meaning of Christmas”, which is usually something about being more generous and loving toward each other. And we should. No arguments there. But the true meaning of Christmas begins with things not so Christmas-y. Our preference for sin condemned us to darkness. But our God, who is infinitely good, reconciled us to Him by offering His Son, the Light of the World. We have to force ourselves to consider how dark is the darkness in order to know great a rescue we’ve been given.

Our very great reward is to gain Jesus, who was given to us at Christmas. In order to prepare for the coming King during Advent, I have to put my traditions and my culture in their proper place. Measured against the gift of Jesus Christ, those things have little value. 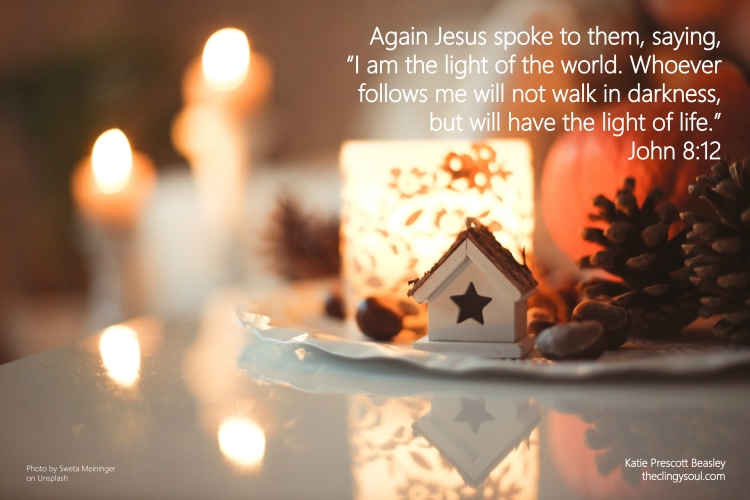 Again Jesus spoke to them, saying, “I am the light of the world. Whoever follows me will not walk in darkness, but will have the light of life.”